Gaeton and me made a nice trip to the Waterfalls in Zongo. Perfect conditions to put the bike to the acid test. We decided to go both together on my bike. Gaeton was my driver today. I enjoyed all the pain and fear on the back seat. He is an incredibly good rider drifting through the curves and keeping the bike on partially heavy tracks.
We started at 6am to the botanical garden in Kisantu. It was something I wont miss as a gardener of course. Hugh bamboos, seldom palms, orchids and more. I could have spend an entire day here. But to be back home tonight we had to drive on. 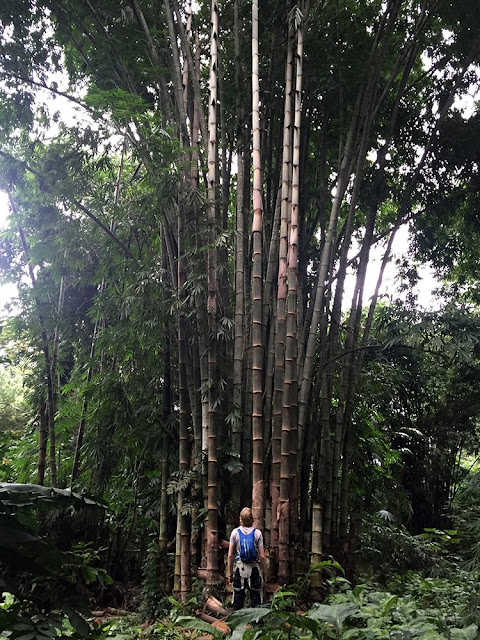 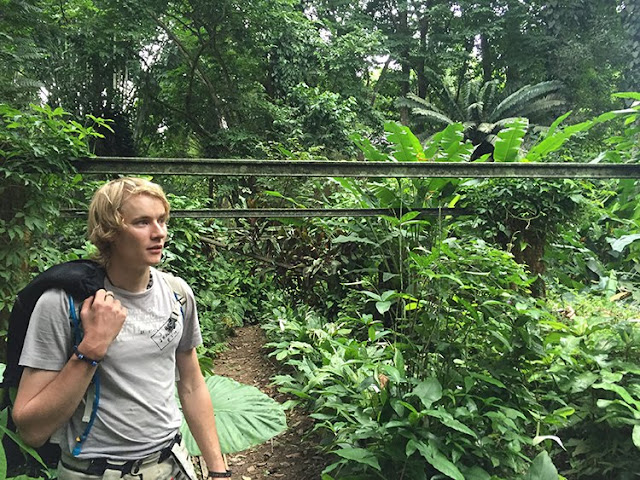 After one hour on good gravel we arrived in Zongo. There it was time to relax for a minute on this overhanging tree before walking on the opposite of the waterfalls. 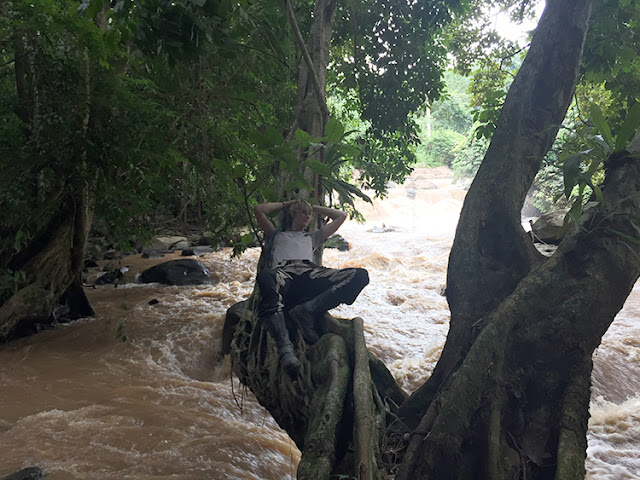 You could have your shower here merely caused by the ascending fog. The permanently wet conditions effect very slippery and dangerous surfaces on the rocks. A minute after this picture I hit one with the back of my head. But good luck, for a second I though I was dead. 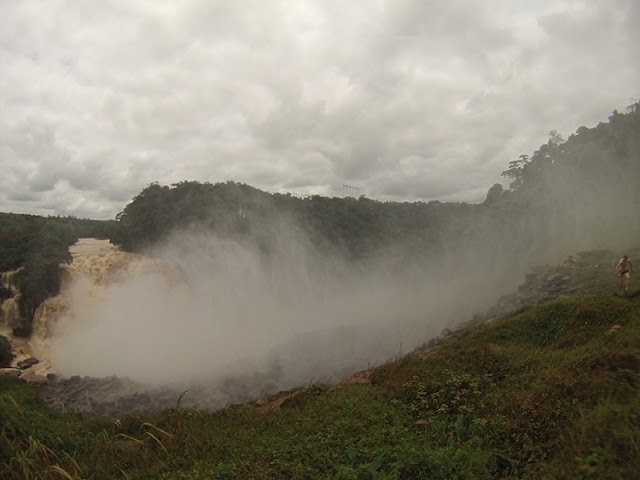 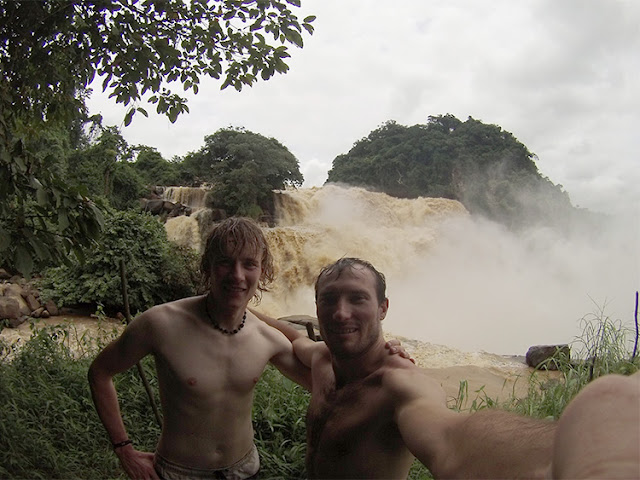 This is not the waterfall behind us but the rebounded water coming upsite down. Absolutely crazy! You are not able to open your eyes for more than a second. It is so much water flushing in your face. 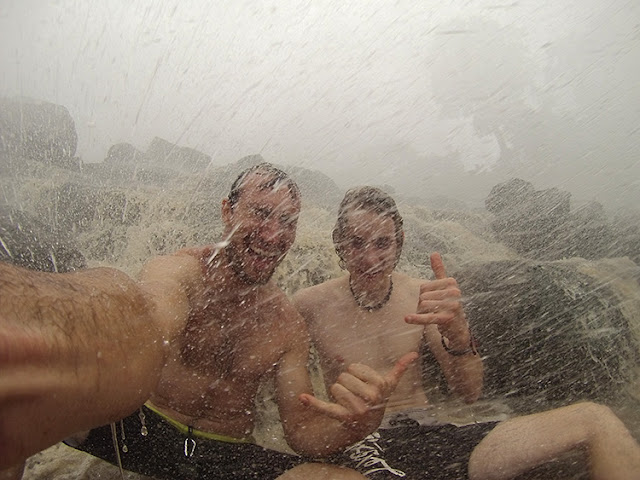 The waterfalls here are certainly quite a touristy place for Congolese circumstances. Therefore we left after this refreshment a beach at the riverside. The Congo river shaped a stunning landscape next to it as the second biggest in the world. If you look at the map you can quickly imagine which influence this water is for the country. All the DRC can be discovered and reached by water. There are everywhere big and small creeks spreading out.

From the beachside we took a little trail leading to the inland and the mountains again. We were climbing up along the creek. 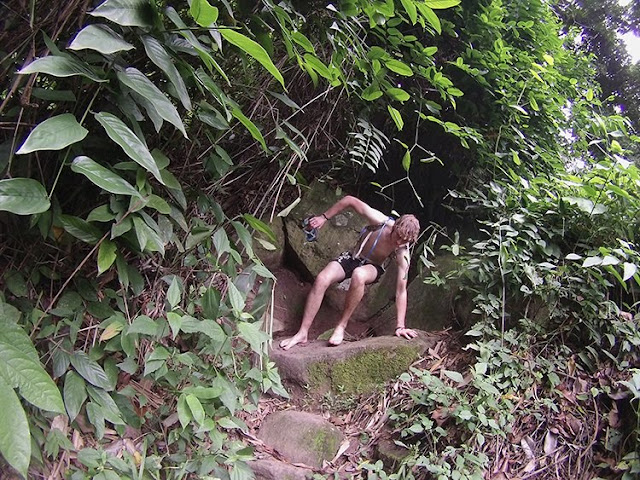 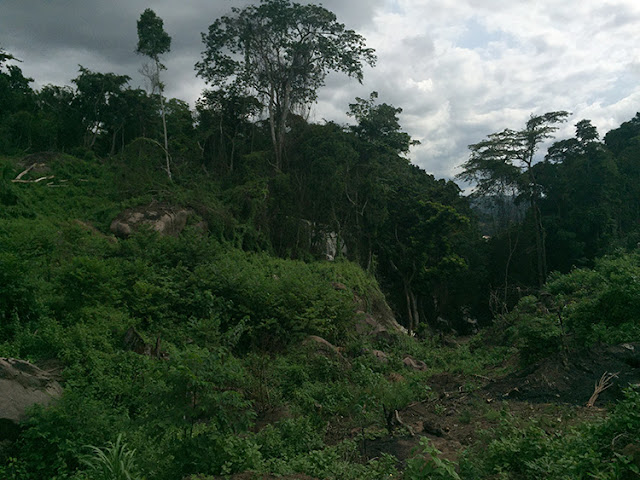 Crossing the water is normally not a big deal. But at the end of the rain season their are unbelievable hugh masses of water coming down the waterfalls. So we put the bags up in the air and started walking. But it was too deep at a certain section that we had to swim. I tried to use a liane but without enough drive. 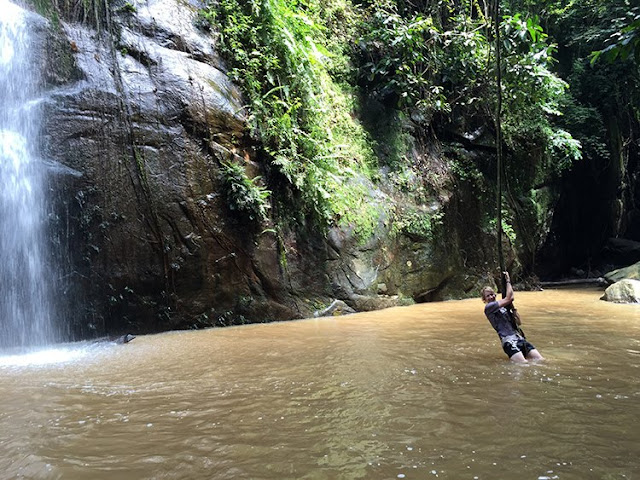 It became more and more tricky climbing the steep slippery rocks. Well you don't think about consequences by doing this. 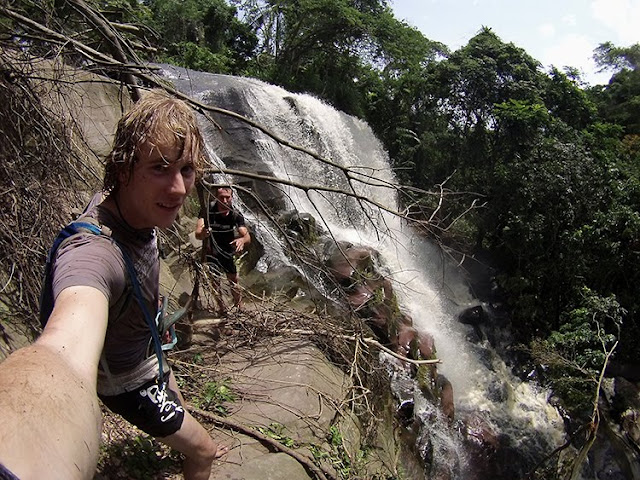 All the danger and effort was worth it when reaching the top. We had sun, music, bilton and beautyful view from the top to the bottom in the deep jungle. 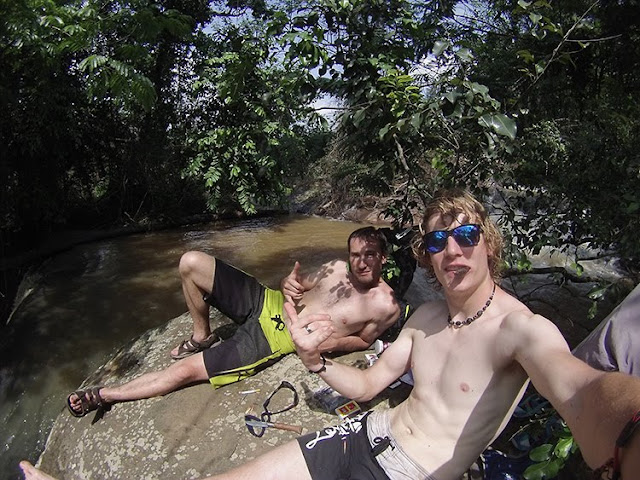 After surviving the descent we enjoyed the massage of 15 meters falling water in our neck. Sitting there on a rock in the water is pure life and meditation. 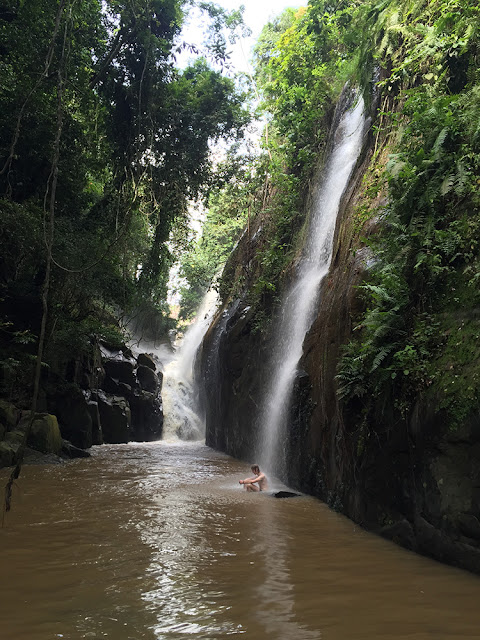 For the way back we choose a different line. In fact it was shorter distance but by these conditions longer in time. The horrible track to Sona Bata demanded all from us and the machine. We were good in time...until a flat tire. But it luckyly happened just before hitting the asphalt. So Gaeton rode to the next village fixing the tire and I followed him by food to drop weight from the rear wheel. Because of the heat I took of my jacket. But the shirt was still wet and on the bike. Some people were a bit confused seeing a white man with the upper part of the body naked and in bikewear. But I perfectly arrived when they fixed it. But riding now at night was no fun. Never never do this when you can avoid it. You can never imagine how dangerous it is if not experienced by yourself. So slow down and we were just a little in delay for dinner in the restaurant. What a suprise - though i'm always on time. 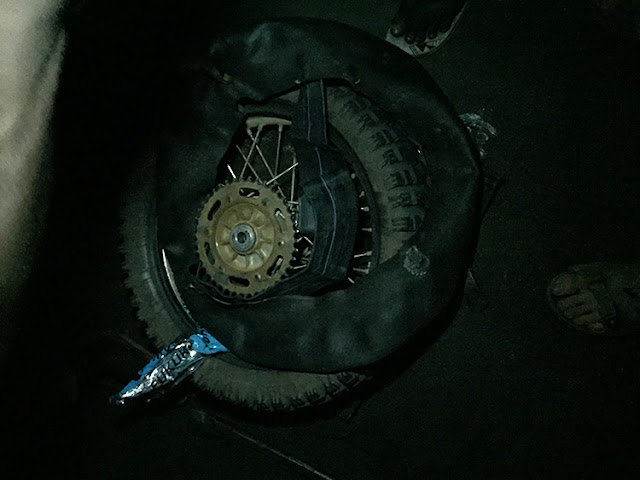 After dinner and a hard long day on the bike we fell asleep like little babies. Our bodies were suffering from the past 320k on and offroad. Next day we slept in until 10 o'clock. I've already forgotten how it feels recovering that long.